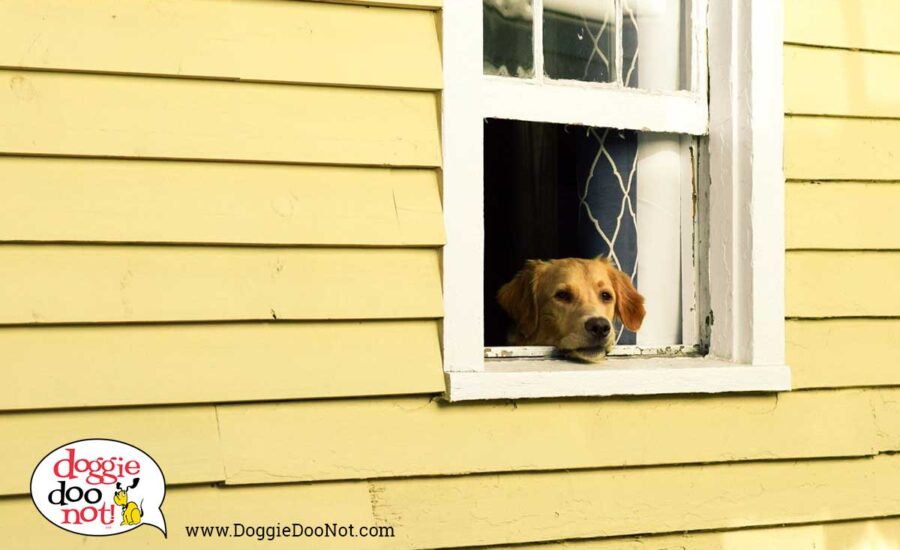 ‘Entre-manurers’ Say Business is Picking Up

Sometimes the slightest suggestion can resonate deeply in the head of an entrepreneur. Tom Nestor, a landscaper since 1988, once had a client ask if he could pick up after the dog before he cut the grass.

That was just enough for Nestor and his wife, Ashlee, to found Doggie Doo Not!, a business that removes dog waste from clients’ property.

Launched in 1999, the business today makes 200 client visits a week and picks up dog waste from residential backyards and some retail businesses in Fairfield County and Westchester County, N.Y.

“We first had a laugh about it and found places on the internet that do this. We figured that we’d do it here,” said Ashlee Nestor, whose father has referred to her and her husband as “entre-manurers.”

Is this business all that you do?

AN: I’m a community planner for the United Way in Greenwich.

TN: I still have a landscaping business called Mulberry Landscaping. So I have two full-time jobs.

What sort of tools do you use on the job?

TN: Gloves, a scoop and a shovel.

AN: And a disinfectant to spray on the tools so you don’t transmit something from yard to yard.

How has the response to the service been?

AN: The feedback has been great. We still have our first five clients that signed up. We keep our customers happy. I think at first we thought it would be a luxury business, but a majority of our clients are double-income families that don’t have the time to do it.

How do you attract business?

AN: We get a lot of business through word-of-mouth and we’ve done some direct mail. We do outreach to pet stores, veterinary clinics and kennels. We’ve also been to pet shows where we’ve been able to hand out brochures.

How do you dispose of the doo?

AN: We double bag it and bring it to the dump. It can’t be used for fertilizer, because dogs are meat-eaters whereas cows eat grass.

How often do you pick up at a client’s home?

TN: We have some that get it once a week and for some we go by two or three times a week.

AN: We have some that call for special events – for birthday parties and weddings in the yard. Some just want it for one time. We even had a woman that called for us to clean every day when her grandchildren were visiting.

Was the any risk involved in operating a business like this?

TN: Getting bitten. I’ve gotten (bitten) a couple of times.

AN: It’s much more of a risk to the person that doesn’t clean their yard. There’s bacteria in dog waste.

TN: There’s also E coli and salmonella in it.

How many employees do you have?

TN: We have one other full-time employee, William McEwan.

Ashlee, do you pickup as well?

AN: I actually was sole scooper in the beginning and I would carry it in the trunk of my Honda Civic.

How much does this service cost?

TN: It ranges from $5 to $40. It depends on how many dogs, how big the yard is and the amount of waste we take away.

The original article, ‘Entre-manurers’ Say Business is Picking Up, was featured in the Greenwich Times. 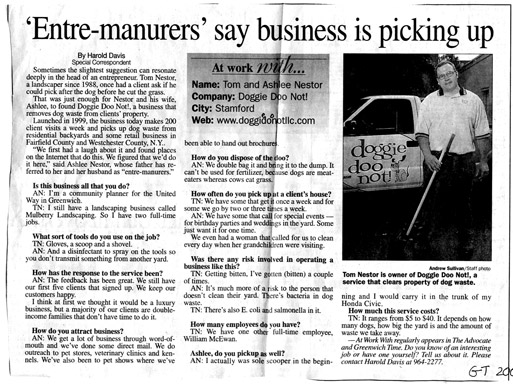